This webpage is kept for archival purposes only and is no longer updated or maintained.

The Hubble Space Telescope was reborn with Servicing Mission 4 (SM4). The fifth and final servicing of the orbiting observatory flew aboard Space Shuttle Atlantis (STS-125) from May 11 – May 24, 2009.

During SM4, two new scientific instruments were installed – the Cosmic Origins Spectrograph (COS) and Wide Field Camera 3 (WFC3). Two failed instruments, the Space Telescope Imaging Spectrograph (STIS) and the Advanced Camera for Surveys (ACS), were brought back to life by the first ever on-orbit repairs. With these efforts, Hubble has been brought to the apex of its scientific capabilities.

To prolong Hubble's life, new batteries, new gyroscopes, a new science computer, a refurbished fine guidance sensor and new insulation on three electronics bays were also installed over the 12-day mission with five spacewalks. Additionally, a device was attached to the base of the telescope to facilitate de-orbiting when the telescope is eventually decommissioned. 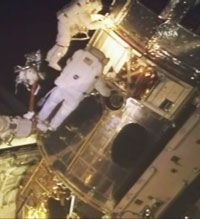 There was a moment during the SM4 mission where it looked like WFC3 might not be installed. Wide-Field Camera 2 (WFPC2), which was installed during the 1993 First Servicing Mission and has performed extraordinarily for 16 years, didn't seem to want to leave, like a "recalcitrant teenager" said astronaut Andrew "Drew"Feustel. The A-latch bolt, the latching bolt to release the camera from the telescope, wouldn't move when Drew applied the prescribed torque. After 45 minutes of discussion and trying several different ratchet tools, Drew was allowed to use brute strength to attempt to loosen the stuck bolt, with the understanding that if the bolt stripped, WFPC2 would stay in. As everyone involved held their breath, it finally loosened. WFPC2, the camera that saved Hubble, was stowed inside its protective enclosure for the return trip home and WFC3 was installed in its place.

The new camera extends Hubble's capability not only by seeing deeper into the universe but also by providing wide-field imagery in all three regions of the spectrum — from ultraviolet into visible and then into near infrared. It is this wide "panchromatic" coverage of light that makes Wide Field Camera 3 so unique. WFC3 is viewed as an important bridge to the infrared observations that will be carried out with the James Webb Space Telescope (JWST) scheduled for launch in 2014.